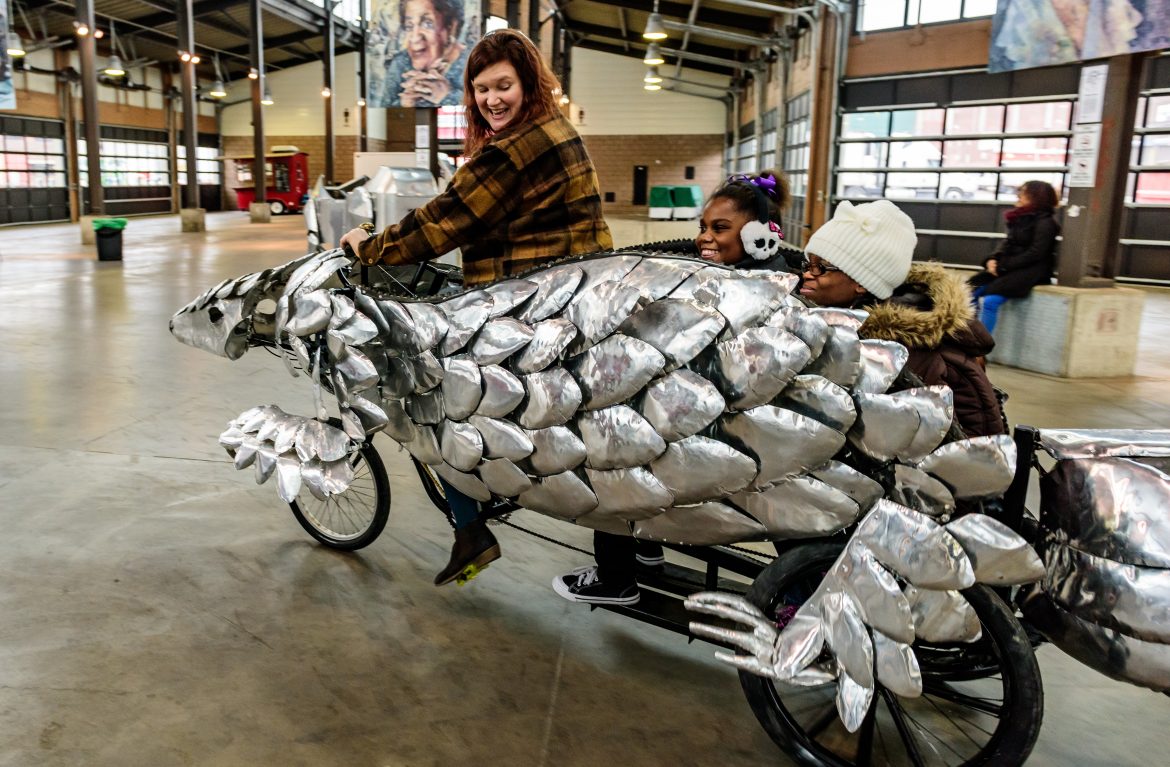 On October 26th The Michigan Fitness Foundation and Safe Routes to School (SRTS) partnered with the Museum of Contemporary Art Detroit (MOCAD) and the writing and tutoring center, 826michigan (826) to deliver a very special Walk-Bike to School Day.  5th and 6th grade students from Spain Elementary-Middle school in Detroit gathered to walk from school to Shed # 3 at the nearby Eastern Market to participate in a round-robin of pedestrian and bike safety related activities hosted by the three partners. While the morning was gray and cold, students were joyful and eager to get some wiggles out, and shortly after 9 a.m. a procession of fifty students, teachers, police escorts, and adult volunteers began to make their way along a predetermined safe route.

As students arrived at Shed #3, a parade of bikes disguised to look like animals— a polar bear, bison, and pangolin— made their grand entrance into the space. The bikes, designed by author Dave Eggers and created by artists Ben Wolf and Juan Martinez, are part of an upcoming exhibit at MOCAD called “The Spirit of the Animal is in the Wheels.” The exhibit opens in early November and is meant to raise awareness about transportation challenges in Detroit. The exhibit will be accompanied by an educational passport featuring SRTS and 826michigan, that asks the public to respond to various prompts related to identifying creative and safe solutions to active transportation issues and routes.

As the polar bear, pangolin, and bison made their way around the Shed, students oohed and awed with excitement. Not only were the students getting an exclusive preview of the bikes, they would also get a chance to ride in them, as each bike has a main bicycle seat as well as a pedicab bench. With the arrival of the animal bikes, the event kicked-off and students broke into three groups to begin the activity rotations.

At station number one, students worked with MOCAD and teaching artist, Levon Kafafian, to make reflective tassels for their bikes or backpacks. At station number two, students joined 826michigan Programs Coordinator, Brandan Pierce, to write creative reflections about transportation. In response to the prompt, “What kind of animal bike would you build and where would it take you?” one student wrote: “I would build a unicorn and take it would take me to the moon.” At station number three, students joined SRTS Operations Coordinator, Mariama Lockington, for helmet fittings and information on how to prevent injuries while riding a bike. Once fitted for a helmet, students were able to take a ride on one of the three animal bikes, causing a general sense of joy and organized chaos as animal bikes full of laughing students zoomed around the Shed.

To close out the event, SRTS raffled off 15 helmets, and then the group began its walk back to school. As the group arrived back at Spain Elementary-Middle, the first rain drop fell, signaling the end to a successful and perfectly timed Walk-Bike to School Day. A big thanks to 826michigan, MOCAD, and the students and teachers of Spain Elementary-Middle School for making this event possible. And an extra special shout out to the Detroit Police Department and the Detroit Public Schools Police Department for making sure students were safe from traffic along the walking route. The SRTS team looks forward to the opening of the MOCAD animal bike exhibit, and to partnering on many more special events like this one in the future. Want to see the animal bikes and students in action? Check out this Facebook Live post from the event.

Please visit 826michigan to find out more about their K-12 programming and also visit MOCAD’s upcoming exhibits. For more information about how to bring SRTS or Walk to School Day to your community, please visit here.