Bike & Roll to School Wrap Up 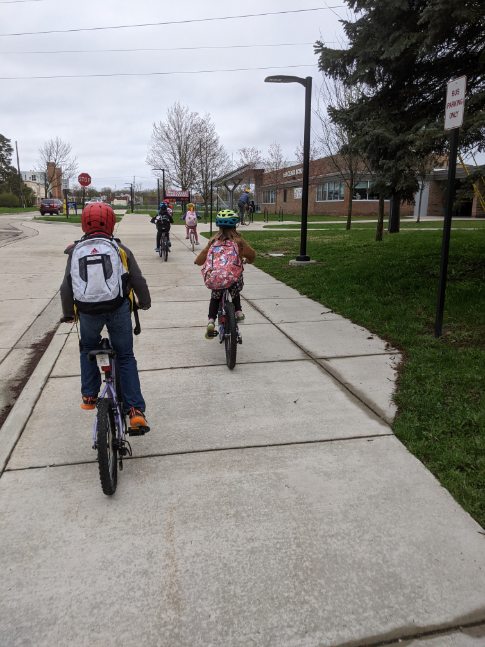 Bike & Roll to School Wrap Up

On May 2, we celebrated National Bike Month with Bike & Roll to School Day (BR2SD). With the addition of “roll” in the event title, we acknowledged inclusion and equity by encouraging all students to safely walk, bike, or roll to school by recognizing the variety of active travel modes people use in their communities.

Michigan was fifth nationally for event registrations, which shows what a great response we had to BR2SD across our state. Registrants were also entered in a drawing to receive free bike helmets and a fleet of LaScoota scooters as a part of the national promotion. We are thrilled to share the news that Long Elementary in Dearborn received the prizes after being selected in the national drawing.

Our Safe Routes to School (SRTS) team took part in the fun, riding with schools at multiple events in the Metro, University, and Grand regions. We joined the East Lansing’s Red Cedar Elementary School festivities, which offered something few others do – a bike train. What’s a bike train? Well, while school bus operators are picking up students on four wheels, teacher Jeffrey Potter is picking up other students on two wheels.Every school morning, weather permitting, Potter rides his bicycle by the homes of several students and safely leads the way as they bike to class. At the end of the school day, he rounds up the kids and gets them back home. The kids get a chance to spend a little extra time with their classmates before and after the school day while getting in some great exercise and building healthy habits.While other bike trains exist around Michigan, they are few in number. The Safe Routes to School team hopes that more schools will be inspired to implement bike train programs and experiment with other creative ways to provide safe routes to school.

Thank you to everyone that participated in another successful National Bike Month and BR2SD!