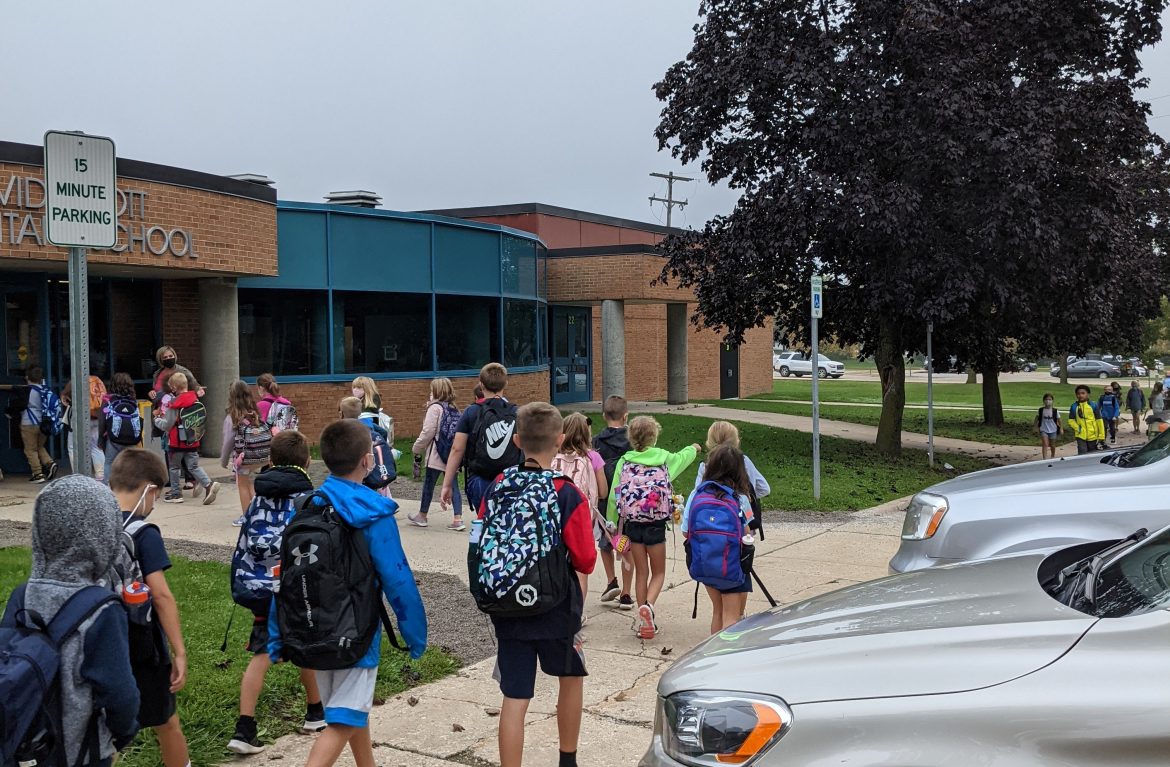 Districtwide approaches to Safe Route to School (SRTS) projects are strongly encouraged because they provide consistent communication, education, and a supportive culture for walking and biking to school. This approach works to ensure that no matter the location a student finds themselves in while traveling to and from school, they have resources that support walking and biking to their destination throughout the district. However, one of the largest difficulties in pursuing a districtwide approach can be that school district boundaries do not often align with municipal boundaries. As a result, communities that pursue a districtwide approach must expand their stakeholder engagement to include all municipalities impacted by the work around school buildings.

In the DeWitt Public School District (DPSD), Schavey Road, David Scott School, Herbison Woods, and DeWitt Middle School are located within the City of DeWitt. The nonmotorized improvements needed to support walking and biking to and from the schools cross jurisdictional boundaries between the City of DeWitt, DeWitt Township, Watertown Township, and the Clinton County Road Commission (CCRC), with the latter operating as the road authority. To pursue SRTS funding, all five stakeholders had to agree to partner on the project. For many communities that require multi-jurisdictional projects, getting stakeholder buy-in can present a barrier. The City of DeWitt and DeWitt Township believed bringing a SRTS program to the larger DeWitt community was important and achievable. When approaching funding, they brought the idea to DPSD and CCRC. Through the City and Township’s solid interagency partnership and willingness to participate in the project, they were able to secure school district support. As former DPDS Superintendent John Deiter shared, “[he was] not initially interested in taking on Safe Routes to School work in DeWitt because of a prior experience in another district where [he] found the application process cumbersome.” He changed his mind when he saw the strong stakeholder partnerships and felt the process would be less cumbersome because of the mutual support and agreed to support the project.

“The coordination between the different jurisdictions was key,” said Wittenberg. “It allowed us to work through any uncertainty that partners expressed early on and reach a comfort level with the work and commitment each needed to provide in order to pursue the nonmotorized infrastructure and for the programming required by the grant. The overall goal of providing access to the schools unified all the jurisdictions.”

The benefits to the area from this project were also recognized by city officials. “DeWitt, as a bedroom community, takes pride in being a walkable community and puts safety as a priority,” explained City of DeWitt Mayor Sue Leeming. “We value the funding and organizational framework provided by the Safe Routes to School program. Without these funds, we would not have been able to pursue all the aspects of this project because dollars are always so short. While there’s still some connectivity issues in our community, we had the ability to put sidewalks in areas where they historically have not been seen. The process provided helpful ideas that get students to come together and use the sidewalks through various activities.”

Through SRTS, the City is building on the nonmotorized assets across the community, and that new connectivity is being recognized.

“Even Watertown Township on the west side of the DeWitt school district now has safe pedestrian access that connects to the schools and other parts of the greater DeWitt area. Connections like this are quality of life assets for the residents,” added Wittenberg

“A key benefit, from the Clinton County Road Commission’s standpoint, has been bundling road projects and the Safe Routes to School sidewalk project to provide economies of scale,” said CCRC P.E. Director of Engineering Marc Trotter. “We brought four road projects with the Safe Routes to School project together for a total of almost two miles of work with the sidewalks on almost half of it. This brought in better prices than if each segment was bid separately.”

Trotter also shared that the inclusion of SRTS funding made it so “we were able to do what was best for pedestrians and were able to use the money where it was needed for pedestrian safety elements, such as a key signalized crossing improvement. The crossing improvement would not have been possible between the cost of the signal and warrants needed for getting it installed. The SRTS funding helped make that come together.”

For every benefit experienced there were equally valuable lessons learned from the process that helped to implement the SRTS project successfully. Stakeholders mentioned how important the guidance they received from Michigan Fitness Foundation’s (MFF) SRTS Grant Coordinator was to the project overall.

MFF SRTS Grant Coordinators provide guidance and explain details of the program early on to help guide and alleviate concerns among stakeholders.

Wittenberg said the support “made the process more achievable and helped the team move at their own pace with the planning work.” Similarly important was taking the step to equitably divide up work at initial stakeholder meetings so that each agency could move the project forward in their own way, whether it was the schools distributing surveys or the CCRC working on the design engineering.

Seeking expertise from area communities with past SRTS project experience was also helpful. Deiter said he was able to get advice on programming and hiring a district coordinator to oversee the programming, the latter being an aspect of SRTS programming where communities frequently have challenges.

DeWitt Walking School Bus Coordinator Danielle Guty said the built environment improvements along routes were a starting point for programming to provide a logistical structure to help take where students are and get them where they need to be in real time. Guty expressed that process improvements were informed by volunteer feedback and that was critical to building a streamlined, flexible, and functional protocol for their community-driven program. She felt without that feedback, the program would not have grown to its present capacity. Now, the “Magic School Bus” happens daily for arrival and dismissal from school. Guty said that DeWitt has “Michigan tough” students that look forward to their walks to and from school in every kind of weather because they enjoy the extra time with friends and the feelings of independence that walking to school provides.

On the engineering side of things, Trotter advises communities not to underestimate the amount of effort a sidewalk project takes as a standalone job. He advises communities to strategically select their lead Act 51 Agency for the project when possible. Trotter saw placing the CCRC as the lead Act 51 Agency as a key advantage to the project because of their direct experience and familiarity with the Michigan Department of Transportation (MDOT) Local Agency Program (LAP) process. Through the expertise of the stakeholders, they built a team with diverse strengths that lead to the success of their SRTS project.

The DeWitt SRTS project created connectivity between four schools, nearby neighborhoods, and a remote drop site, and included the installation of sidewalks along school properties. The creation and expansion of walkways connecting two neighborhoods to school properties, along with key improvements like crosswalk striping, signal improvements, and ADA facilities was achieved.