Case Study: Kingsford Honors Past While Moving into the Future 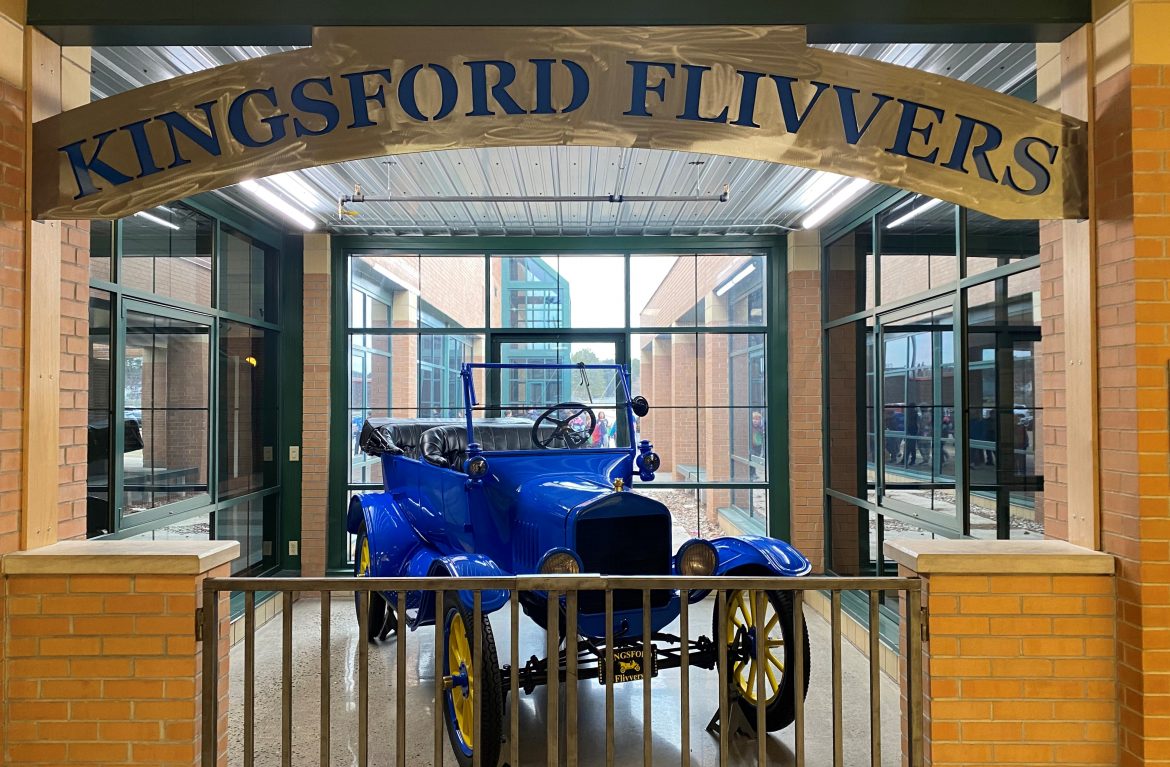 Case Study: Kingsford Honors Past While Moving into the Future

The famous Ford Flivver was manufactured in Kingsford in the early 20th century – a small town in Michigan’s Upper Peninsula. After Henry Ford established the automobile plant, the Flivver, which was the nickname for his Model T automobile, began serving as the unofficial school mascot. Today, two of Breitung Township Schools, Kingsford Middle School and Woodland Elementary School carry on the tradition by donning the Flivver moniker as the official school mascot to celebrate their small town’s manufacturing past.

In this same celebratory spirit, and fitting with trends nationwide, the automobile has long been the primary focus of their city transportation system. But in recent decades, the City of Kingsford has made efforts to become a more active, walkable and bikeable community. Some of their active community efforts were realized from their 2019 Safe Routes to School (SRTS) project.

Former Kingsford City Manager Tony Edlebeck says that the schools contacted to him to ask for help applying for a SRTS grant. Not only were major routes to the schools lacking sidewalks, but they lacked ADA-accessible ramps. And there is a medical campus that separates the schools from key residential areas which made traversing between them safely difficult without the use of a car.

When the decision was made to pursue SRTS funding, a team was organized with Edlebeck and former Kingsford Middle School Assistant Principal Doug Roberts leading the effort. As part of the requirements for approval, the team administered surveys among parents, students, and school officials that asked them to express their concerns around walking and biking to school. They received 370 responses. The parent responses frequently mentioned issues with incomplete sidewalks, while school officials put greater emphasis on connecting the schools with a walkway for sibling pick-ups. From this feedback, a committee of local families was formed to help oversee the decision-making process.

“We had to do an assessment walk. We walked around the campus access points looking where we would get the best bang for our buck, so to speak, to improve or increase walkability,” said Breitung Township Schools Superintendent David Holmes.

After receiving immediate community support, the project seemed achievable and began to take shape. Plans were drawn, redrawn, and redrawn again to work within the allocated project budget.

While construction costs increased considerably between project inception and final approval, Edlebeck, a veteran of public service work, wasn’t surprised: “We had to make some modifications without jeopardizing the project itself. We were still able to accomplish that.”

The SRTS grant was approved, and construction began, and due to their attention to budget and overall detail, the project went off without a hitch. On a symbolic note, the majority of the project, which covers Pyle Drive, Hooper Street, and Balsam Street, sits on the same ground where the Ford Flivver was manufactured so many years ago.

The 5-foot wide, ADA-compliant pathways were also an immediate hit with the community.

“It really addressed a need on streets that kids use to bike or walk to school that didn’t have the infrastructure or pathways,” said Superintendent Holmes, “That was really a benefit to the middle school, high school, as well as Woodland Elementary.”

Beyond the benefits of walking and biking to school, the pathways have proven useful for a variety of school activities. The school track and soccer teams use the sidewalks for conditioning, and Vice Principal Nash helps organize the annual Fun Run event for students, which now utilizes these routes.

Although the project was school focused, the benefits from it are felt across the community. The paths help provide access to community pillars like Northpointe Behavioral Service Center, Dickinson-Iron County Health Department, and to local day care and physical therapy centers. Residents often use the new pathways for as a place to be active and the planning team has heard numerous positive comments from community members.

“My office is right in front of the sidewalk, one of the main ones along Pyle Drive, and I see people using it all day long,” Holmes said, “It’s a great community asset.”

Kingsford students have much safer opportunities to get to and from school with new sidewalks where there previously were none. The routes are accessible for all students who walk, bike, and roll to school because of the ADA-compliant ramps. Crucially, the pathways also connect the schools, providing for easy and safe pickups between siblings across the different buildings in the district.

This project was made possible through the collaborative efforts of Kingsford School District, City of Kingsford, Coleman Engineering Company, Michigan Fitness Foundation, Michigan Department of Transportation, and Federal Highway Administration.